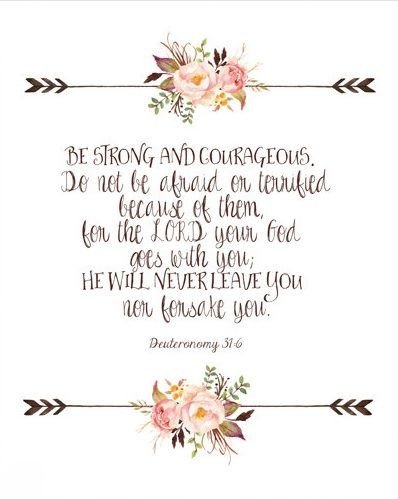 {COURAGE} •the ability to do something that frightens one. •strength in the face of grief or pain

The story of Gideon, a timid young man who was beating wheat in the wine press, And the angel of the Lord appeared to him and said to him, “The Lord is with you, O mighty man of valor.” ~Judges 6:12 He then proceeds to tell the Lord that he is the smallest of his family, that was considered the least in their tribe.

The story of Joshua, a servant of Moses, who was sent as a spy to the land of Canaan. Later after Moses died the Lord came to Joshua saying, “Moses my servant is dead. Now therefore arise, go over this Jordan, you and all this people, into the land that I am giving to them, to the people of Israel.
Joshua 1:2. After giving Joshua specific directions for the task He had for him, the Lord said, “Have I not commanded you? Be strong and courageous. Do not be frightened, and do not be dismayed, for the Lord your God is with you wherever you go.”
Joshua 1:9

In both encounters, there was an enemy to be conquered and the Lord made sure to tell them, that He is with them, that there is no need to fear.

Let’s be honest, there’s an enemy around us and there are days where we need to be reminded to: “Be strong and courageous and do it. Do not be afraid and do not be dismayed, for the Lord God, even my God, is with you. He will not leave you or forsake you, until all the work for the service of the house of the Lord is finished.
1 Chronicles 28:20

No matter how scary the task before you, do not Fear, “For God has not given us a spirit of fear, but of power and of love and of a sound mind”
II Timothy 1:7

Perhaps the journey is extra difficult in this very moment and the road looks so lonely and hard. My friend, may these words be a great comfort to you. For I, the Lord your God, hold your right hand; it is I who say to you, “Fear not, I am the one who helps you.”
Isaiah 41:13

Brothers and Sisters, just as Gideon did, I urge you to take Courage, because the FATHER is with you. May He be your source of strength and courage.